Days after celebrating my 15th Class Reunion, my family boarded a plane and headed to Disney World.  I invited one of my friends and her daughter to join us on the trip.  When I told her the dates of the trip, she informed me that day we would be returning was her birthday.  She also said that she wanted to go out when we returned to celebrate her birthday locally, which was cool with me.

The whole day I’m trying to figure out what to wear that night because I knew I would be pressed for time when we returned.  As soon as I dropped her off at home, I received a text from my friend who was having a Girl’s Only Pool Party.  I decided to stop by even though I knew I would be cutting my time close.  When I got there they were in the middle of the festivities but it had gotten a bit chilly out so the part shifted inside.  Once, inside stories about the day began to be told.  One person in particular, Erica, which is my friend’s niece, kept using her and her friends lingo.  They used such phrases as “Real Quick” and would add “-age” to the end of several words.  The next day when I posted a video on social media I captioned it “Something Real Quick” because I literally I got dressed in a hour, which is real quick for me.

I originally thought about wearing this beige lace top and camel long pencil skirt but once I put the outfit on I hated it.  It just did not look well together.  So I quickly went back to the closet to look for something else.  I ended up wearing a dressed I purchased from FashionNova several months ago.  It was the green Propose a Toast dress off the site.  I paired it with my Multi Wonderland heels, my red spiked clutch, gold accessories. 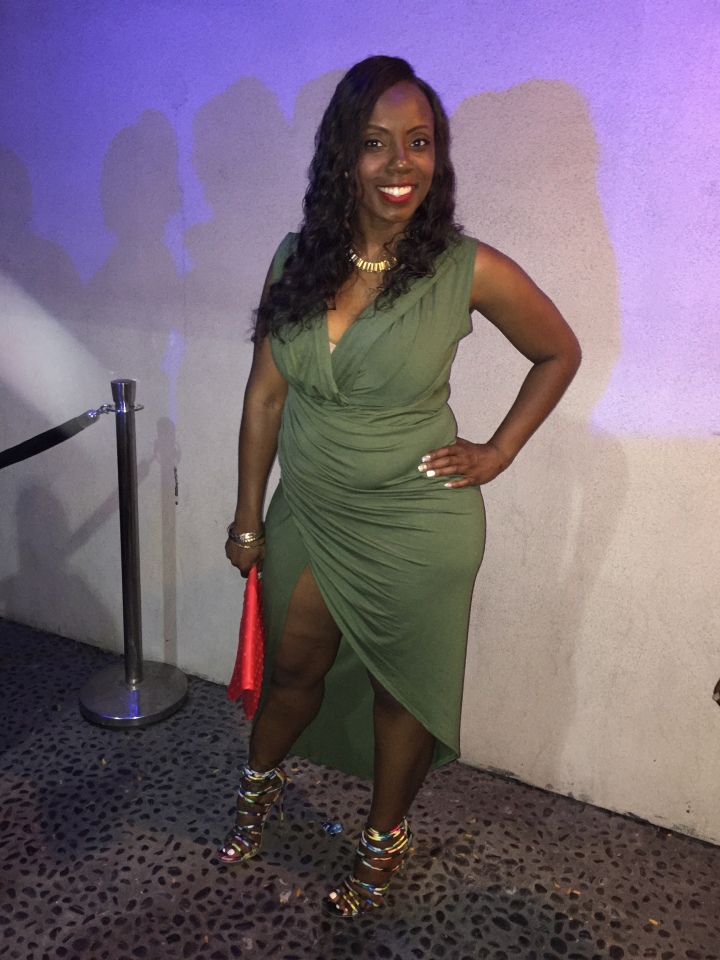