At the beginning of October two of my friends shared with me that they were going to have a combined masquerade party for their birthday Halloween weekend.  I got super excited because I have never been to a masquerade party.  Immediately, I took to Pinterest and Google to see what is exactly the appropriate attire to a Masquerade Party.

After getting some ideas I began looking for something to wear because I figured I would end up ordering something and would need time for delivery.  I debated on ordering a dress that I fell in love with for a couple of days but after talking to some friends I decided to order it.

The dress arrived when I was out of town but when I finally got home and tried it on I wasn’t in love with it.  I had an issue.  Whatever I wear, I have to wear a bra and this dress was not appealing because my bra was too visible.  After, figuring out how I could camouflage the bra I was satisfied with the dress.

The dress was black fabric covered with gold sequins forming a filigree pattern on the dress.  Black tulle was added to the dress to extend its length.   Since, the dress was so busy I just wore my simple black single-sole heels.  I wanted a bold necklace to go with the dress but nothing that was going to be “too busy.”  I went into Aldo to see what they have because recently I’ve been in love with their accessories.  I found a nice large chunky black and clear beaded necklace, which coincidentally my friend throwing the party returned because she changed the style of her dress.  I also purchased a pair of black and gold stud earrings to match the necklace.

The party was awesome and my girls came to slay! #mysquadisdopeAF 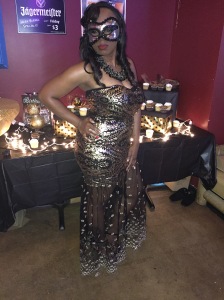 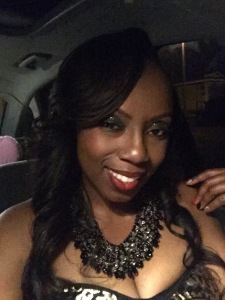