Well if you know it’s my birthday, you know the Horace Mann All Class Reunion is coming soon. Since, Horace Mann has been having the alumni dance and picnic I have been celebrating my birthday that weekend with family and friends. This year I wanted to celebrate the whole weekend.
I started Friday night by bar hopping with some friends. Individual classes typically get together the Friday before the big dance to celebrate amongst themselves. We started a Catch 22, which has awesome wings, with the Class of 2000. Then stepped into Que’s Lounge to see what the Class of 1985 had going on. Must I say they party better than some of the younger classes. Finally, we ended night at Hustle and Joe’s to party with the class of 1995.
Bar hopping requires a cute and casual look. I wasn’t even feeling putting on makeup that night so I knew a dress was out of the question. I dug out my dark denim high waist jeans because it had gotten pretty chilly outside due to it raining earlier in the day. I scanned my closet for something to wear with the jeans finally coming across a dark floral kimono that I’ve had for at least a year and a half.
I had originally purchased the kimono to match a necklace I saw in a mailed ad from Charming Charlie. I ended up walking out that store that day with three match pieces, none I had yet to wear together. So I figured now was the perfect opportunity to do so. The necklace is plum, navy and blush floral themed with navy beads. The Kimono is navy with plum, blush, and olive flowers all over it. The purse I purchased was a mini plum bucket purse. I completed the look with a pair of olive booties. 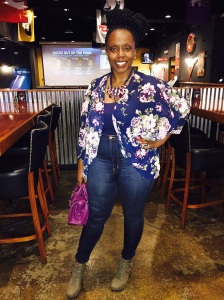